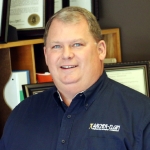 Ross graduated with a Bachelor of Architecture in 1988 from Drury University, Springfield, Missouri. Ross has 27 years of experience as a project manager, designer, field technician, and CAD manager and started with Archer-Elgin in 2011. He has been involved with a variety of both municipal and private commercial projects ranging in size from a few thousand dollars to several million. He has significant experience in construction administration, inspection and project scoping. He is familiar with due diligence items such as boundary surveys, geotechnical investigations, environmental assessments, traffic impact studies, wetland delineations, archeological assessments, zoning issues, land use issues and development agreements. Ross is registered as a Registered Architect in the States of Missouri and Illinois.

Ross is a Certified Floodplain Manager and Certified Professional in Erosion and Sedimentation Control. Having grown up along the banks of the Missouri River, Ross knows and understands flooding and the impact it can have on a community. He also is keenly aware of the impact to the natural environment that can be caused by development and lack of erosion and pollution control.

Ross was born in Clinton, Missouri and raised in Hermann, Missouri. He grew up in a medically-oriented family having a father who was a physician and mother who was a nurse. He has one older brother and two younger sisters. Ross’s parents encouraged their children to excel which started early. Ross and his brother achieved the level of Eagle Scout in the Boy Scouts and his sisters are Gold Award recipients in Girl Scouts. All four children continued with the foundation laid by their parents early in their lives and are successful in the work that they now do as adults.

While growing up, Ross learned early the value of hard work. While in high school he baled hay, mowed lawns, painted, and worked as a greenskeeper for the local country club. While in college Ross was a resident assistant for one of the dorms on campus, member of the American Institute of Architectural Students and played on the Drury golf team.

In 1988, after graduating from Drury, Ross moved to Champaign, Illinois for his first professional position. Over the next 23 years, he worked with various firms moving from his beginning position as CAD drafting technician to CAD director/manager and ending as a project manager for large-scale commercial clients including Wal-mart.

In 1993, Ross made the decision to return to Hermann to be closer to family and raise his family in the wonderful community he grew up in. In his spare time, Ross enjoys golfing, fishing, hunting, boating, and spending time outdoors and when he can’t be outside, he enjoys spending time in the kitchen – as he explains it “trying to cook”. Usually he’s fixing something that he bagged while hunting and fishing. Ross has two teenage sons, Ross and Thomas, both of whom participate in many sports and other activities. All three have an interest in golf and enjoy heckling each other while on the course.

Ross’s personal motto is “It’s not how many hours you put in, it’s what you put in to the hours.” Archer-Elgin and our clients are beneficiaries of his dedication to quality and that early focus on success that was instilled in him by his parents.