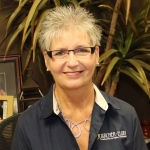 Dyann has over 38 years of experience working in the Civil Engineering field. She began her career in the Civil Engineering Advising Center at Missouri University of Science and Technology, Rolla, Missouri, and after nine years moved to the consulting engineering industry. From her start in 1977, she has continued to broaden her office administrative experience and develop her expertise in the field. She has over 19 years experience in administrative management for consulting engineering firms and has been with the firm since 2004. Dyann has developed technical expertise in QuickBooks and Bill Quick and she is proficient in a variety of computer programs.

Dyann is responsible for administrative functions at Archer-Elgin. She works directly with project managers on project budget and schedule tracking and she compiles contract documents and coordinates bidding procedures, administers the submittal, change order and pay application process during construction. She creates and organizes accounts and tracks project budgets. Her responsibilities include accounts payable, accounts receivables, all human resources duties including payroll, insurance and retirement benefits administration and employee policy administration and management.

Dyann has attended coursework in office administration from the University of Missouri-Columbia and from Missouri State University and obtained a Certified Professional Secretary certification early in her career.

Dyann was born in West Plains, Missouri, the youngest of two children. Her parents moved to Salem, Missouri when she was 14 where her father took the position of Area Supervisor for the Missouri Department of Transportation. Dyann met her husband Andrew and after marrying, they moved to Rolla, Missouri. Andrew holds the position of Executive Director of Communications for the Missouri University of Science and Technology.

Dyann and Andrew are big sports fans and she lists Duke, the Broncos, Packers, Sea Hawks, and the St. Louis Cardinals as some of her favorite teams – and of course the MO S&T Miners. They both enjoy traveling and site seeing and have taken several trips to Chicago, Illinois. However, they remain true Cardinals Redbird fans – they don’t go there to visit the Cubs! Dyann also lists shopping on her list of favorite things to do and this is another reason to visit the Windy City.

Dyann enjoys outdoors activities and is an avid walker – she walks miles every day. She values hard work and dedication and ethics, honesty and integrity are core values to her. She has painted on her office wall a quote by Winston Churchill – “I’m easily satisfied with the very best.” This quote is a reflection of the quality of her work and her commitment to Archer-Elgin and our clients – she works hard to make sure we provide the very best.