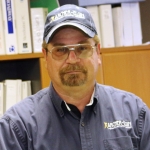 Danny is a Construction Field Inspector for Archer-Elgin. Danny is a U.S. Military Veteran, serving with the United States Navy for four active tours of duty and two inactive tours. Following his military career, Danny was offered a temporary position at Elgin Surveying & Engineering, Inc. in 1988 to set monuments and has been with the firm ever since. Danny has over 28 years’ experience in boundary and topographical surveying along with construction layout. As a Construction Field Inspector he performs construction inspection to include concrete testing and flow meter monitoring. Throughout his career, Danny has worked with contracts for the U.S. Forest Service and Missouri Department of Conservation and has retraced and set GLO corners (aluminum monuments). He has worked for clients including Alberici Construction Company, Bales Construction, M.A. Mortenson Company, SM Wilson and Watts Weitz Contractors and has done extensive work for the Digital Training Center at Fort Leonard Wood, Missouri.

Danny holds professional certifications as a Concrete Field Testing Technician by the Missouri Department of Transportation and Certified Survey Technician in the State of Missouri.

Danny was introduced to a life of service to his country when he was a young child. He was born on Pearl Harbor Day – Dec. 7, 1963 – in Germany and lived in various states in the U.S. as the son of an U.S. Army serviceman. When Danny was in sixth grade, his family moved to St. James and he attended school there and has called St. James home since that time. Partly because of his father’s service in the Army, Danny joined the U.S. Navy when a young man and was stationed in San Francisco, the Philippines, and completed a tour of duty on the USS Coral, an aircraft carrier. When he completed his career with the Navy, he returned to St. James to be close to family.

Danny likes the mid-Missouri area and the small-town life he has in the St. James community. He lives on a farm outside of town that is home to Danny and his daughter Leanne. He likes to fish in his spare time and has a pond on his farm so he just has to walk out his back door with a fishing pole. He has an extensive collection of old bottles and rocks that he has collected – many found at various job sites over the last 26 years of working in the field.

Danny lives his life with a basic philosophy – “Any job worth doing is worth doing well…regardless of what the job is”. The work he does at Archer-Elgin reflects this belief and compliments the firm’s commitment to excellence.