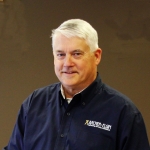 A second generation surveyor, Dick was raised in his late parents’ surveying business located in Rolla, Missouri.  After graduating from high school in St. James, he joined the Army, went through helicopter flight school, was commissioned a Warrant Officer, and spent 1969 in Vietnam flying LOH’s and the ubiquitous UH‑1 “Huey” with the Americal Division.  Following the Army he received BSCE and MSCE degrees from the Missouri University of Science and Technology, and his PhD from the University of Arkansas.  Leaving Arkansas he joined the faculty of the Department of Civil Engineering at S&T as an Assistant Professor (1980‑1984).  In 1984, he left the University to purchase the family surveying business.  From 1984 until 2008 Dick was the owner and President of Elgin Surveying & Engineering, Inc., building it from a relatively small firm into a surveying and mapping company.  During those years “Elgin Surveying” had contracts with federal and state agencies, consulting engineering firms as well as developers, lenders and individuals.  The firm accomplished about 22,000 projects.

In the early 1990’s, Dick became an Adjunct Professor at S&T, teaching the required and elective courses in surveying.  He continues to teach surveying at S&T and he is on the “seminar circuit” giving professional/technical talks about a variety of surveying topics to surveyor meetings nationwide.

Along with colleagues Dr. David Knowles and Dr. Joe Senne, Dick developed a series of celestial observation products, the “ASTRO” software, and they wrote the “Celestial Observation Handbook and Ephemeris” which was published by the Sokkia Corporation from 1985‑2008.  The trio also wrote a series of technical articles about celestial observations which were compiled into a book.

Dick and David Knowles coauthored “Legal Principles of Boundary Location for Arkansas” which is a synthesis of about 1100 decisions of the Arkansas Courts concerning the principles of the location of boundaries and rights in real property.  They also wrote “The U.S. Public Land Survey System for Arkansas.”

Dick wrote the “The U.S. Public Land Survey System for Missouri” which is a textbook and reference manual on the subject for Missouri.  He also wrote a monograph “A Primer on Missouri Riparian Boundaries,” and has authored numerous articles on technical and professional surveying subjects.

An avid collector and researcher of early American surveying equipment, Dick owns one of the largest private collections of such equipment in the U.S.  He has written articles about and given presentations about collecting surveying equipment.

For fun, Dick, his wife Becky and their dog enjoy touring by RV or in their perfectly restored Alfa Romero GT Junior or Austin Cooper 1275 S.