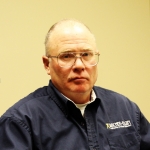 Richard (Ric) began his professional career with the U.S. Air Force, spending 15 years as an aircraft engine technician and military instructor with six years of engineering experience in the areas of space and missile facilities development, air base operations/maintenance and combat engineering. His assignments included various overseas and stateside permanent and temporary duty stations. During his military service, he graduated from the Community College of the Air Force with an Associates of Science degree in Aircraft Powerplant Technology which laid the foundation for his electrical engineering education and continued career focus. Ric went on to graduate with a BS in Electrical Engineering in 1987 from Texas A&M University, College Station, Texas and a MS in Electrical Engineering in 2009 from the Missouri University of Science and Technology, Rolla, Missouri. Ric is registered as a Professional Engineer (PE) in the States of Missouri, Kentucky and Texas.

Ric was born at Fort Campbell, KY, while his father was in the U.S. Army, and is the oldest of five children. He spent most of his childhood in Missouri after his father completed military service, living in or near Columbia, Ashland, North Kansas City, and the Gladstone, Missouri areas. As a teenager, Ric lived with his family in Lincoln, Nebraska but returned to Missouri when he was in high school, where he graduated from Oak Park High School in the North Kansas City area.

Ric has been married to his wife Cheryl (originally from Ukiah, CA) for over 35 years. Cheryl is a retired Registered Nurse (RN). They have two sons, five grandsons and a new granddaughter. Their sons live in Troy, Missouri and work in the automotive service and repair business in the St. Peters and O’Fallon, Missouri areas. Cheryl and Ric currently live in St. James, Missouri. When Ric is asked what his hobbies and interests are, the first thing on his list is grandchildren (emphasis intended), followed by baseball, bowling, exploring the “Great Outdoors”, and auto repairs and restoration.

Ric has two personal mottos that define his work and his life. The first: Be prepared and be there to serve your country and community 24/7, 24 hours a day, seven days a week. Ric started young in preparing to serve – he worked to become an Eagle Scout in the Boys Scouts of America and then offered years of service in the U.S. Air Force. And together, Ric and Cheryl have continued to serve. At the various communities they have lived in, they both have spent over 20 years working with and supporting youth development programs including scouting, youth athletics, and local education programs and support groups.

Ric’s second personal motto is: Every day is just another day of school. Never stop learning. Ric continues to live his personal and professional life in a learning mode – a critically important factor in the highly technical field of electrical engineering.