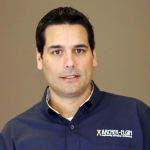 After graduating from Missouri State University in 2000, James co-founded a commercial and residential construction company, County Line Construction, and spent the next 14 years actively engaged in the construction industry.  His company’s work included a wide range of projects from small remodels to large commercial projects including schools, government buildings and retail stores.  A sampling of construction projects completed includes the structural construction of the 13,000 SF Buena Vista Ranch Hunting Lodge in Rogersville, Missouri  for owner Jerry Jones of the Dallas Cowboys; he was the foreman for the structural steel construction of a new $4.3 million Vocational Technical building for the Carthage Missouri School District; and the structural construction of the Theta Chi Fraternity building located in Springfield, Missouri. During his time in the construction trades, James became increasingly interested in the field of civil engineering and in 2010 made the decision to enter school again. During this time, he continued to operate his construction company, working seven days a week while taking a full class load.

James grew up on a farm outside of Owensville, Missouri – the third of four children. After he graduated from high school, his parents moved to Rolla when his father took the job as CEO of Town & Country Banks.  While living on the farm, James’ family raised cattle and horses and he learned good work ethics from the time he was a young child. His parents taught him that if he was going to take the time to do something, to take the time to do it well. His father taught him that professionalism, honesty and your word are the most important things in life.  As a young adult, James was a professional rodeo athlete for five years, traveling the county and gaining some amazing experiences.  During this time, he took his first construction job at the age of 17, instilling his love for the construction industry.

James is married to his high school sweetheart, Lacie and has four children. Daughter Camie will be starting college in the fall and is pursuing a doctorate in pharmacy, son Gavin loves performing in plays and playing baseball, son Jayd is an all-around athlete who plays baseball, soccer, and runs track, and the youngest son James is following in his parents footsteps with his love of horses and rodeo.

In his spare time, James enjoys a wide variety of activities including calf-roping, riding horses and golfing. His interests include traveling, spending time with his family, building things with his hands, and like his young son, he likes being outdoors. As a family, he and Lacie enjoy rodeo and baseball, with favorite destinations including St. Petersburg, Florida and National Parks.

James work is guided by his personal motto – “Obstacles are what you see when you take your eye off the goal.”