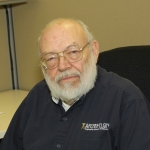 Hugh’s educational background includes coursework in civil engineering from San Bernardino, California and a Bachelor of Arts in History from Missouri University of Science and Technology, Rolla, Missouri. Hugh compiles survey and other project data related to all types of engineering/surveying work including all applicable documents of record including deeds, easements, surveys and ownership data. Hugh is registered as a Professional Land Surveyor (PLS) in the State of Missouri.

Hugh began working for R.L. Elgin & Associates on April 3, 1973 and holds the distinction of the Archer-Elgin employee with the longest tenure. He was hired as a survey party chief working with a field crew of at least three people. As he explains – this was in the old days before the new equipment that is now used and at least three people were required in each crew to handle the necessary field survey equipment. Hugh’s experience in surveying began as a construction engineer with the U.S. Army in Europe.

Hugh was born an only-child and lived in many different states growing up. He met and married his wife Maggie while living in southern California and they moved, together with their 11 children, to Rolla in March of 1973. Hugh had been stationed at Ft. Leonard Wood during his time with the United States Army and they made the decision to move to Rolla because it was a good place to live and raise children and land was priced fairly reasonably at that time.

He believes that a good marriage is something you really have to work on and he and Maggie made a pact early on in their marriage that it was the two of them against the children. Their large family all worked together, growing a big garden, raising livestock, and all of the children having a horse at one time or another. He remembers one summer in the midst of harvesting, canning and freezing season one of their children saying in frustration “Summer is nothing but getting ready for winter!”.

Hugh has special interest in buildings and structures with historic significance. This also compliments Hugh’s interest in large format photography and he has a pretty extensive collection of photographs with a historic architectural emphasis including country school houses, historic courthouses, mills, and truss bridges. In 2012, Hugh and Maggie lost their home to fire and they are in the process of rebuilding. Also lost in the fire was most of Hugh’s photographic processing and printing equipment.

Hugh believes that it is important to like what you’re doing – both in work and in life. And he also believes that if you are going to do something, whatever it is, you should do it 100 percent. He is committed to his chosen profession of surveying and after 46 years of dedicated service to the survey profession and our clients, he has proven that he loves what he does and he does give 100 percent.